St. John’s Church has served the community of Maindee for over 150 years and has become a local landmark. On Saturday, 12th November 1949, a major fire began in the church and a great part of the interior was, sadly, destroyed.

The church of today – the church you will see here – retains its original impressive Victorian architecture, whilst much of the inside was rebuilt. A substantial part of the interior dates from the three years following the fire. We hope you’ll agree that the church is a magnificent building today, both inside and out.

Key points in our history

A small group of people decided to build a church in the Maindee area of Newport to serve a growing and increasingly underserved Victorian population that, to that point, were a part of the area covered by Holy Trinity, Christchurch. Building began in 1859.

April 1860 – The opening of St. John the Evangelist

It cost £200 to purchase the land, £2000 to build the church, and £300 for the tower. The building’s main architect was Mr. Seddon whose name was quite well known amongst church devotees. The church opened on Tuesday, 17th April 1860, with a service led by the Bishop of Llandaff. The first vicar was the Rev’d James Newman who came from Brecon.

Our church’s bell was installed in the bell tower, marking the completion of the initial work on the church.

The stained glass windows at the east end of St. John’s were damaged during the bombings of the Second World War and were taken away for repair.

On the 12th November 1949, a serious fire started and much of the inside of the building was destroyed. Repair of the fire damage cost £50,000 and took nearly three years to complete.  By some miracle, the stained glass in the east end windows were still away being repaired, and so are indeed the originals.

After three long years, the church reopened. The version you see today still in many ways echoes the building as it was before 1949. However, the wooden features are lighter and brighter, and the artwork on them is modern, and making the mark of a new generation on the life of St. John’s, whilst remaining in keeping with the space.

For all our history, we are not simply a relic:  we are a living community of people exploring faith, socialising, and enjoying one another’s company, whilst contributing to a bigger whole.

The organ at St. John’s

Originally, the instrument was built by Hill, Norman, and Beard and was purchased by a local ship-owner, Bertram Pardoe Thomas, who installed it in his house at Pardoeham in Fields Park Road.

During the fire, St. John’s original organ, which had been housed in the north transept, was destroyed along with all the fittings, including the beautiful wood-carved reredos depicting The Last Supper.

While the church was rebuilt, services continued in the Parish Hall in Victoria Avenue accompanied by a harmonium and later a small electronic organ was used when the church reopened.

In 1957, Pardoeham was put up for sale and the vicar, Canon John Stephens, negotiated with the owners to purchase the organ. Messrs Hele of Plymouth sent an expert to inspect the Pardoeham organ and he reported that, with the addition of certain stops, the instrument would be most suitable for use in St. John’s. The organ was purchased and removed to St. John’s where it was installed in the north transept.

Every organ is unique, in that it must be built to suit the acoustics and architecture of its host building. Thus, every organ has its own story and ours is no exception. 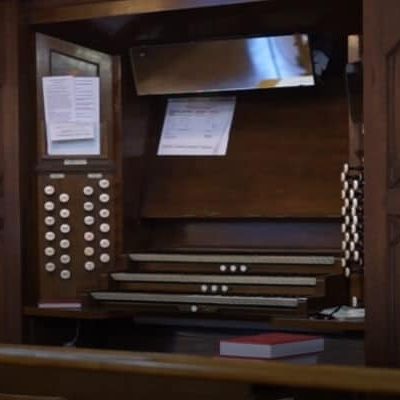 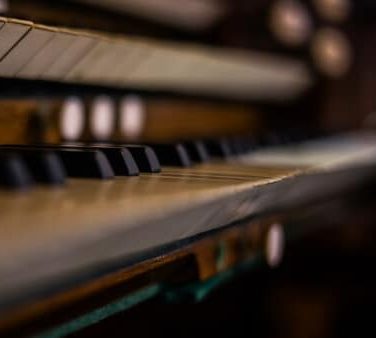 The Anniversary Cross was created in 2002 to celebrate the 50th anniversary of St. John’s Church being re-opened in 1952 after the fire that had destroyed so much of its interior in 1949. It was only through the hard work and commitment of the church members of the time that the church was totally refurbished and transformed.

The Most Rev’d Dr. Rowan Williams (then Archbishop of Wales and Bishop of Monmouth) wrote these words:

“There is always something very special about a church that shows in its very fabric the experience of death and resurrection. St. John’s, with its spacious and graceful proportions, is much loved as a building, but part of its atmosphere is also surely the knowledge that it has risen from the ashes of the disaster of 1949.”

Archbishop Rowan officiated at the service of Thanksgiving, Holy Eucharist, and Blessing of the 50th Anniversary Cross on Sunday 29th September 2002.